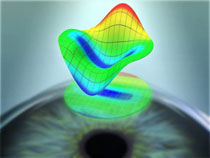 A human eye, as any other optical system, is not deprived of small errors. Beside myopia, farsightedness and astigmatism there exist fine disturbances of the eye optics – aberrations of higher order. Such disturbances are corrected with SUPERLASIK operation.

As distinct from a standard LASIK technology, parameters of laser impact are calculated on the unique device – wave front analyzer. These data are passed to the computer of excimer laser. After SUPERLASIK operation visual acuity may reach 100%. Also the quality of postoperative vision becomes higher (vision in different conditions of illumination, in twilight time, in bright light and so on).

It should be noted that the correction of aberrations of higher order is possible not with every patient. Let us render it concrete.

By passing through optic media of the eye the light is subdued to distortion of the wave front (wave aberration).

The reasons for it are different:

Peculiar qualities of SUPERLASIK operation in the “Sight Recovery Center”.

Nowadays few in number clinics that are engaged in correction of aberrations of higher order (the so called SUPERLASIK technology) orient themselves toward diagnostics and correction of summary eye aberration, i.e. distortions on the whole length of refracting media of the eye from cornea to retina.

However it should be noted that the value of wave aberrations of the whole eye is unsteady. Its changes are stipulated for a pupil size, age, accommodation condition, changes in vitreous body, in retina and so on. Consequently the perspective of such an approach to correction of wave aberrations is somewhat doubtful.

According to many scientific works the retina is a significant and, what is important, the most constant, unchangeable source of origin of wave aberrations. With this in mind a German firm SCHWIND created a complex equipment including KERATRON for isolated diagnostics of cornea wave front, ABERROMETER for impartial metering of aberrations of the whole eye and a laser installation ESIRIS connected by the computer equipment with diagnostic provision for the correction of aberrations of both lower and higher order. This technology of vision correction was called by our German colleagues “optimized LASIK” or SUPERLASIK.

For today our clinic is the only one in Russia that introduced into practice this principle of vision correction.

During the detailed pre-operation examination all anatomico-optic parameters of eyes are measured and above mentioned aberrations are analyzed. When significant starting eye aberrations are absent, the vision correction is carried out with the program “traditional LASIK” (i.e., correction of aberration of only low order: myopia, farsightedness and astigmatism).

In case of presence of significant optic aberrations the correction can be carried out with the program “optimized LASIK” (SUPERLASIK) the technology of which has its peculiarities.

The measurements data are processed in a special computer program that modulates an algorithm of personalized ablation (i.e., of excimer laser impact) taking into account peculiarities of the wave front of cornea and reasoning from the whole number of individual parameters of the patient’s eye and depending on the predicted result of operation. The developed algorithm is passed into the computer of excimer laser. Course of the operation itself practically does not differ from the traditional LASIK method. The difference is in the program of ablation (i.e. program of laser impact).

Your application is accepted!